A few years ago, I facilitated a conversation on the differences between Organisational Development and Change Management, two of the more prominent approaches to organisational change. The conversation took place in a LinkedIn group with almost 60,000 professionals registered.

The point of the conversation was to understand if professionals involved in change were aware of the differences between these two perspectives, how they thought of each, and how their thinking influenced their work. Responses were varied; some identified philosophical differences, some differences in beliefs about which they thought was better – and sometimes why, while still others saw the two as alternative approaches to be applied depending on the circumstances – which mostly was expressed as fitting with the preferences of the customer. My read of the responses was that the majority reflected the participant’s own familiarity of what was on offer.  In other words, participants advocated for what they knew and had a vested interest in.

If you’re reading this blog chances are you have an interest or perhaps have been involved in, organisational change. For those of you who have undertaken change projects, can you recall which of these had the success of the change initiative clearly defined and with explicit criteria against which success could be assessed? And of those projects, which had mechanisms in place to monitor success against these criteria? And of those, which maintained those monitoring mechanisms for more than 3 years? I have one more question; of the projects that had clear criteria for success, which criteria were related to successful installation (of an IT system, a change in structure, or a new manufacturing or service process for example), and which criteria related to strategic success?

I’ve been doing work in organisational change for quite some time and in my experience much of the investment at the micro level isn’t monitored against strategic objectives. Further, lessons relating to the effectiveness of a particular approach to change are not captured and embedded back into the organisation. I am curious to know of your experiences, so please, join the conversation via the comments form below.

Anecdotally then, the choices made relating to approaches to change seem to fall back, not on what is the most effective approach for the organisation strategically, but more on what fits with the experiences and beliefs of managers who are given the task of getting the job done. And these choices seem to be significantly influenced by the priorities assigned to the job; most often speed and cost. The story doesn’t stop there, for these same priorities seem to be driving the development of approaches to change, with modern Change Management evolving into a tool for rapid project adoption. This is a notable contrast to its earlier roots, not to mention the expectations of organisational stakeholders. More on the latter in future blogs. 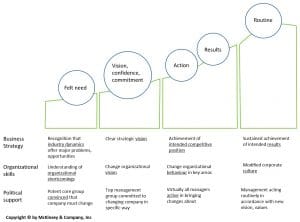 ge Management appears to have risen from the work of Julien Phillips of McKinsey. Some may remember Phillips as co-author, along with Peters and Waterman, of the seminal work ‘Structure is not Organization’ which introduced the world to the 7S framework. Phillip’s work on Change Management was published in Human Resource Management in 1983 under the title “Enhancing the Effectiveness of Organizational Change Management”. In that article Phillips presents a high-level model that reflects some of the systemic aspects of the 7S. As represented in the diagram below, Phillips model takes a multiyear time horizon, includes strategic drivers from the external environment, speaks to the multitude of divergent interests that is the making of organisational politics and touches on the need to align organisational culture with the intent of the change. Importantly, the model is focused on the management team of an organisation, helping them to think about how they might succeed with making the change they are accountable for.

Fast forward to today and the most popular approaches to Change Management involve much shorter timeframes, are more oriented to minor customisations of predetermined solutions, and are overwhelmingly monitored for delivery of project reports and far less for medium-term business benefits. Importantly, accountability seems to have shifted away from general management to temporary project teams with Change Management now focused on selling the change, nullifying resistance, and establishing the initial skills required of the newly established system. Modern Change Management seems to be much more oriented to installation than the early Change Management approaches, which were considerably more strategically focused.

The big question is, is this really the intent? Who is this approach to change serving and who should it be serving? These important questions will be explored in part two of this blog.